Anyone want to go to the Del Mar Theatre and get creeped out with me? 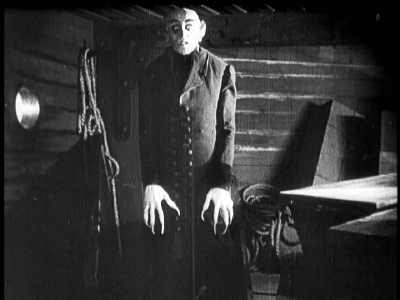 Nosferatu is a German Expressionist film by Friedrich Wilhelm Murnau, starring Max Schreck as the vampire Count Orlok. Its original German title is Nosferatu, eine Symphonie des Grauens (“Nosferatu, a Symphony of Horror”). The film, shot in 1921 and released in 1922, was in essence an unauthorised adaptation of Bram Stoker’s Dracula…

7 pm on Tuesday the 30th. Westi will be introducing the film! And… she says there will be live music!

If you can’t make it to the theater, you can stream or download it.

The music was perfect – spooky, but not too distracting from the movie.

Near the end of Act I, the Alum Rock 5.6 earthquake hit. You could see the two-story-high ceiling swaying. The downtown fatalities from the Loma Prieta quake flashed through my mind, but after a few seconds, of course, the shaking stopped. The house lights went on briefly and a quarter to a third of the audience went out to the lobby for a few minutes, but the movie kept going and the musicians kept playing.

When we got a chance, people made phone calls. Amba called Marc and he got a quote from me saying the shaking was scarier than the movie.

It got published in the Sentinel the next day, but the Sentinel has a lousy website – the article is gone now.

A night to remember!

One Response to “Nosferatu movie showing at the Del Mar”