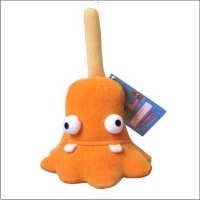 My eleven-year-old nephew (I’ll call him L) found the designer toy store! I didn’t know it existed. It’s called Cardboard Spaceship. It is full of all things simultaneously cute and warped. He wanted everything in the store, I suspect, but strategically chose this relatively inexpensive item to ask for: an evil ice cream cone. We said no because he has so much stuff already we can’t imagine where he’d squish it into his room. Sorry, L! At least the store had lots of cool free stickers and postcards, and he got to collect several. 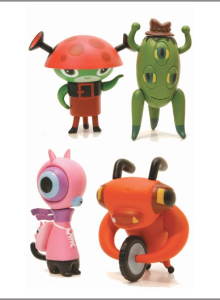 So as a consolation, here’s a picture of said evil object, and also a set of toys I like by the guy who did Scary Girl (I recommend the comic you’ll find there).

After leaving Cardboard Spaceship, we hit the boardwalk arcade where L proceeded to invest many quarters, getting the longest play time for his two bits on the Super Mario pinball machine. If I find myself there again, I’ll head for Super Mario right away. Rewarding play, fun sounds, more time for your quarter than the average pinball game. This guy likes it too.

I have a secret hankering to try Dance Dance Revolution but can’t get anyone to join me.

3 Responses to “No evil ice cream cone for you, nephew”