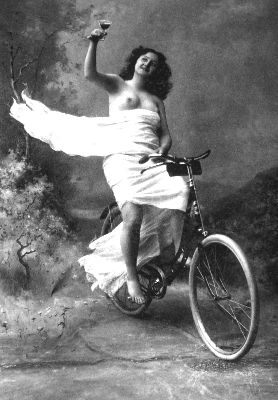 My bike frustration of today illustrates that pedestrians can cause problems by forcing cyclists into the path of motor traffic.

I was crossing an intersection, and a woman was pushing a baby stroller across the street, meanwhile talking on her cell phone. She was using the crosswalk properly and I didn’t give her much attention.

So we get to the other side and I have to stop in the intersection, because instead of going up onto the sidewalk like a normal pedestrian, she goes into the bike lane, camps out there, right at the corner, and jaws on the phone. I had to yell at her so she would hear me and let me get out of the damn Water-Branciforte intersection.

Her sins were threefold:

1. Being in the bike lane when there was a perfectly good sidewalk, thus blocking me

2. Walking on the right hand side of the road (if you ever have to walk on the road for lack of a sidewalk, use the left), thus not being able to see that she was blocking me

3. Talking on the phone, so that she could not hear me the first time I asked her to stop blocking me

4. Endangering her baby by behaving so thoughtlessly

Whew, I feel better. Thanks for the chance to vent.