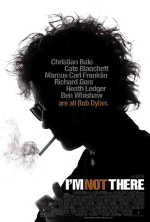 The best thing about I’m Not There is Cate Blanchett. Otherwise, the new Dylan movie is a big bore.

By using six different actors and settings to portray Dylan, INT gets across its message just fine – that Dylan has refused, all of his life, to be pigeon-holed, though the world has tried its darndest to do just that. But it’s so heavy-handed. Martin Scorsese’s 2005 documentary No Direction Home reveals the same idea much more naturally.

In fact, many scenes of INT are simply redone NDH scenes, with names changed and interviews paraphrased. I kept on doing double-takes as I realized “this Alice character is Joan Baez, but Joan Baez was more interesting,” etc.

Cate Blanchett is the only one of the six Dylans who emanates (or is allowed to emanate?) that palpable ruthless, poetic intelligence that, for me, embodies Dylan’s charisma. But Dylan does it even better.

So save yourself a long expensive snore in the theater – wait and rent it, and fast forward to Blanchett’s scenes. Better yet, rent No Direction Home.

(Oh, and get a friend to lend you the soundtrack for I’m Not There, since it’s quite enjoyable.)

Anyone willing to defend I’m Not There and lambast my boorish ignorance? Let the flames begin!