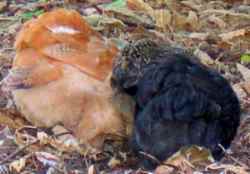 I was at work a little while ago when my housemate’s email arrived with the news that Hen died today.

She was found stuck under a bush in the yard, and he wasn’t sure whether she broke her neck while trying to get out, or died of exhaustion as she struggled. He buried her and made plans to build a small cross on her grave.

Yes, Henrietta was a hen. I think it must be an occupational hazard for domestic birds to die from, well, stupidity.

Hen was a good chicken and a good hen. She was definitely Big Sister to her foster sisters Oprah and Rickie. She was at the top of the three-hen pecking order; she was always the first to gobble up any grain or leafy green goodies. She laid the biggest eggs of the three, I believe.

She was also closer to her human adoptive mom than I have ever seen a chicken be to a human. She would hop up on Amba’s shoulder or even her head.

We will miss her. If there is a Great Chicken Yard Up Yonder, I know she’s there scratching for big juicy bugs.

Sigh. I’ll have to eat my words over at Rantasaurus about taking care of chickens so they won’t die.

Wanna know something weird? When I got home, the first song that came up on my shuffle was Sacaron Agua by Amparanoia. Take a listen, there’s a rooster crowing in it.